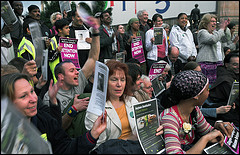 “What does it mean when the authorities can change the rules and deny me help to make my case to the Home Office? Are they aiming to deliberately sabotage our legal cases?”

Mercy Wanjiku* ran a clinic in Kenya, to protect girls from Female Genital Mutilation. She sought asylum in the UK, after being captured and tortured for two days – and left on the side of the street to die. She may be deported this week.

Mercy’s story is terrible enough on its own accord – as is the reluctance/refusal of the government to offer refuge. But the Black Women’s Rape Action Project has found out that only three days before her appeal hearing, staff at the infamous Yarl’s Wood Detention Centre interferred with Wanjiku’s post, and confiscated her copy of Legal Action for Women’s Self-Help Guide Against Detention and Deportation:

It took an official complaint, intervention by Black Women’s Rape Action Project (BWRAP), letters to her MP and a theft report lodged with the police to force Yarl’s Wood authorities for the Guide to be returned.

This shocking statistic emerges near the bottom of the BWRAP press release, but I think it needs highlighting:

Hundreds of women have relied on LAW’s Guide to provide crucial information for their case, information that should be provided by lawyers. But because of legal aid cuts there are hardly any lawyers able to do this work. Over 60% of women in detention are going to their appeal hearings unrepresented.

Here is the background to the story, again from the press release:

On 8 October, and despite her protests that it was an infringement of her right to privacy, Ms Wanjiku was forced to open her mail in front of Yarl’s Wood staff. The Self-Help Guide was confiscated even though Ms Wanjiku informed officers that she urgently needed access to information in the Guide as she had an appeal hearing for her asylum claim in three days and she had no lawyer (see notes below). She was told by a male member of staff that it was “illegal to have the book in here” and that he was following orders!

But no such orders exist. In fact, Detention Centre Rules, paragraph 4[2] state that “No letter or other communication to or from a detained person may be opened, read or stopped save where the manager has reasonable cause to believe that its contents may endanger the security of the detention centre or the safety of others or are otherwise of a criminal nature or where it is not possible to determine the addressee or sender without opening the correspondence.” Clearly nothing in the Guide could be construed in this way.

BWRAP, which has been providing support to Ms Wanjiku, took a statement from her by phone. We helped Ms Wanjiku make an official complaint to the UK Border Agency, to SERCO the multi-national company which runs Yarl’s Wood and report the theft to Bedfordshire police. Within hours, Jackie Pitt from the Detention Services Criminality and Detention Group UK Border Agency was forced to admit that the Guide had been taken in contravention of the Detention Rules. She apologised saying “we can only hold our hands up to it . . . officers have misinterpreted procedures”. Ms Wanjiku is still waiting for this apology in writing. Ms Pitt assured us an investigation will be carried out into why the Guide was taken. Any investigation must address how many other women and men have been illegally denied information about their rights which could assist them in making a claim for asylum and protection.

*Not her real name